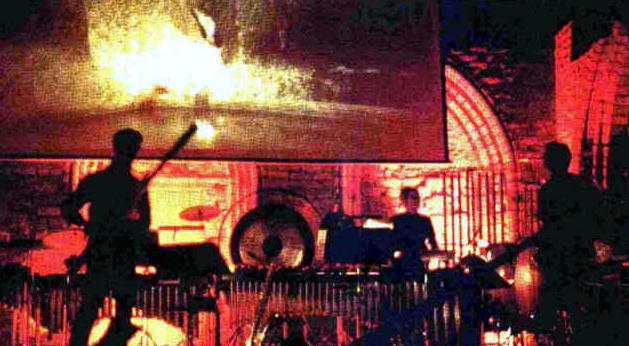 he basis for this AudioVision are the elements: Water, air, eaeth, and fire, which interact in an interplay with the basic colors blue, yellow, and the point of departure for the composition "Unda Orbis".

Unda Orbis is a meditation of sounds, music, light, and rhytms. It goes beyond the mere spectacle of the usual unification of music, painting, and photography.

Shapes, tones, and paintings ride through an artistic universe on a wave, whose origins somehow appear to be far beyond the comrehensible. The sound of the seemingly unnatural pairing of Alpenhorn and didgeridoo, the ritual instrument of the Aborigines, comes through the concert experience as a tapestry of fog.

Timelessness becomes a sensory experience. The song of the whale, the trance-like rhythms of the voodoo drummer, the stomping dancers of the Australian natives, the light of space --everything appears to stem from the same source.

Audiovision is the art from of the representation of sounds and images. The effect of aural impressions is strengthened through the visual. The visual is made complete in an exansive way through the aural.

The concept of Audiovision is realized the pairing of photography and music. Painting and photographs are projected onto a screen in in a subtly changing sequence.
The artist selects the pictures according to from, color, and structure. The sequence of pictures then serves as the basis for the mixing. Out of this blending arises a new pictures which is neither painted nor photographed. It is this phase which is the art of projection. It is inspiration for pictures which are newly created and continually evolving.

The resulting pictures are like tones. They are abstract, similar to a photographic Partita for Music.